In the context of “growth of urban activism in small Russian cities through P2P learning” the “Stadt im Dialog 3” project just had its second activity carried out: a visit to some of Germany’s best examples on community-based initiatives tackling urban improvement. A group of 12 Russian urban activists had the chance to experience these projects and listen the stories directly from the experts.

The study visit was held between the 10th and the 17th of November, with the aim of accommodating the expansion of horizontal thinking of the participants, while avoiding the creation of any hierarchies in the models of horizontal urban development. The project is also focused in strengthening the education and training factors in the process of learning. As a result, the possibility of meeting with German experts, sharing and exchanging expertise and experience with each others was a valuable opportunity for the project participants.

On the first two days of the activity, Berlin and several local projects that have been developed by local grass-roots were visited. In the case of Park Glesdreieck and Mauerpark, the group learnt about the resistance from the city activists to protect the landscape and turn it into a park, instead of allowing the city government to give away the plot to building developers. Today, the area has become a natural park and public space. A similar action of resistance was observed from the Holzmarkt project. This project is seen as a productive result of a grass-root initiative against Mediaspree, the typical project of the commercial urban development aimed at increasing value of the land along waterfront. The Holzmarkt project reflects the resistance of the population of Friedrichshain-Kreuzberg, in their citizen initiated referendum demanding “Spree riverbank for all”. 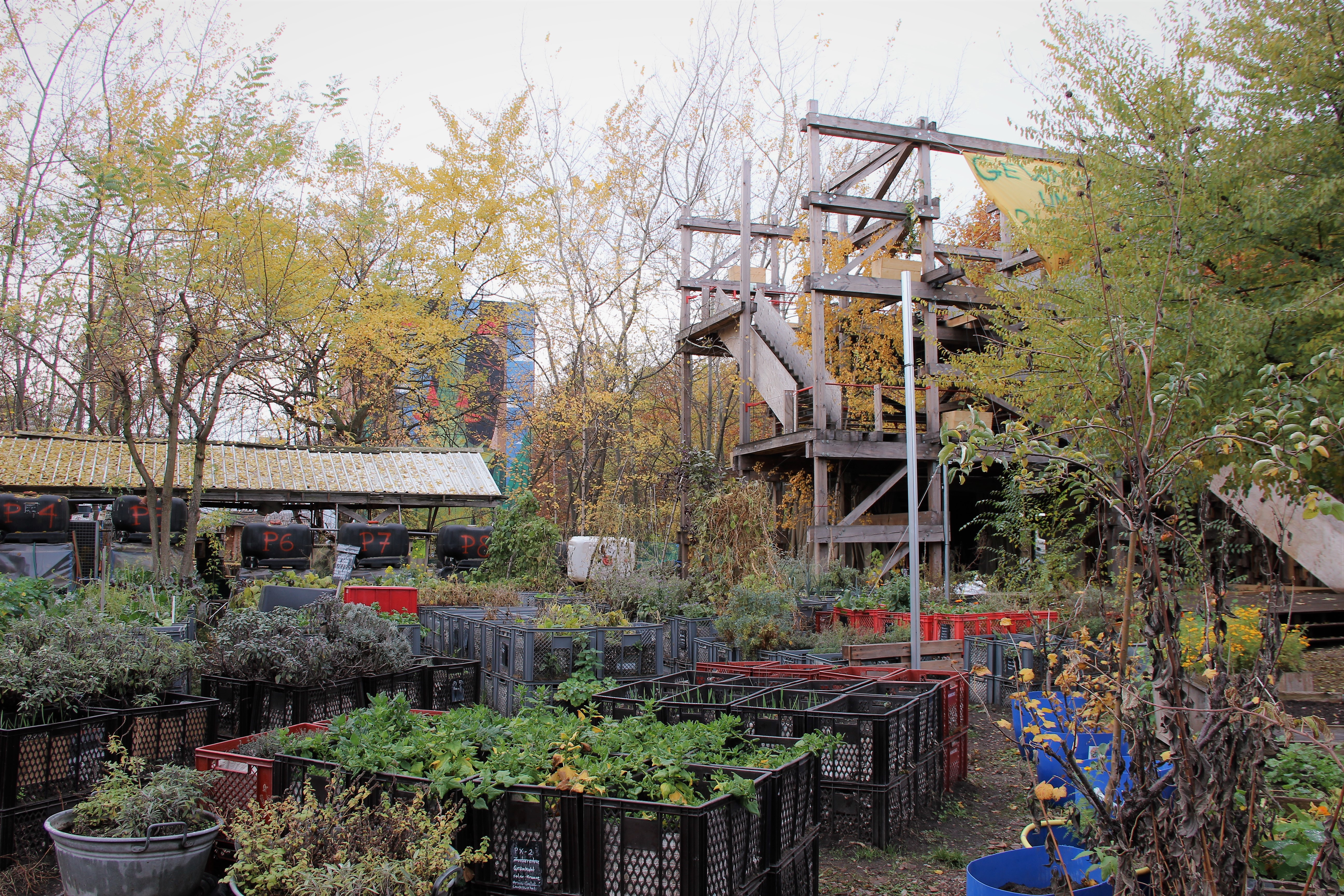 Another example of urban gardening was found in The Prinzessinnengarten at Moritzplatz, in Berlin Kreuzberg. It was initiated in 2009 by the group Nomadisch Grün, namely by Robert Shaw and Marco Clausen, who squatted a wasteland in order to realize their vision of a green space in the heart of the community, in the city centre. The examples of a floating house and a community centre, “Freibeuter,” seem to reflected this function. They wanted to develop it into a place for sustainable living (called “Station Auge” project) and cultural activities. Now “Friebeuter” is open to public and hosts various public activities, from meetings of the street-youth initiative “Gang Way” to collective cooking and music events.

On the third day, the participants visited Erfurt, the capital city of Thuringia. Steffan Präger, from Plattform e.V., lead the discussion and shared the experiences of Saline 34. Since 2011, together with young people and adults, Platform e.V. has made a vacant house in the north of Erfurt usable again. The Saline 34 wants to give them the opportunity to make new experiences and to take responsibility for a house – their house. With alternative forms of use and the creative potential of the users, it should become a beacon enabling new cultural movements in the north of Erfurt. The house not only offers affordable space for young ideas and projects, but also serves as a focal point in the neighbourhood and as an experimentation centre for youth participation. Still within the same neighbourhood, we continued our discussion in Nordbahnhof Erfurt (North Train Station Erfurt), which now hosts Frau Korte, a space for subculture, encounters and music. It was founded in late 2013 – with the aim of making the North Train Station in Erfurt a place for experimental and diverse events and to breathe new life into the area.

The following day, in Weimar, was very rewarding as well. The visit and workshop in OMA, during the morning period, were definitely the high point in this visit. Andreas Schmitges, programm manager at OMA, gave the group a look into OMA and shared the experience of this organisation, as well as the Yiddish Summer festival that they organised. OMA is a platform for imagining and realising new cultural practice and forms of social engagement. It promotes a critical and positive understanding of difference and diversity. To wrap up the visit, he even taught the group how to sing a Yiddish-contemporary song about peace! 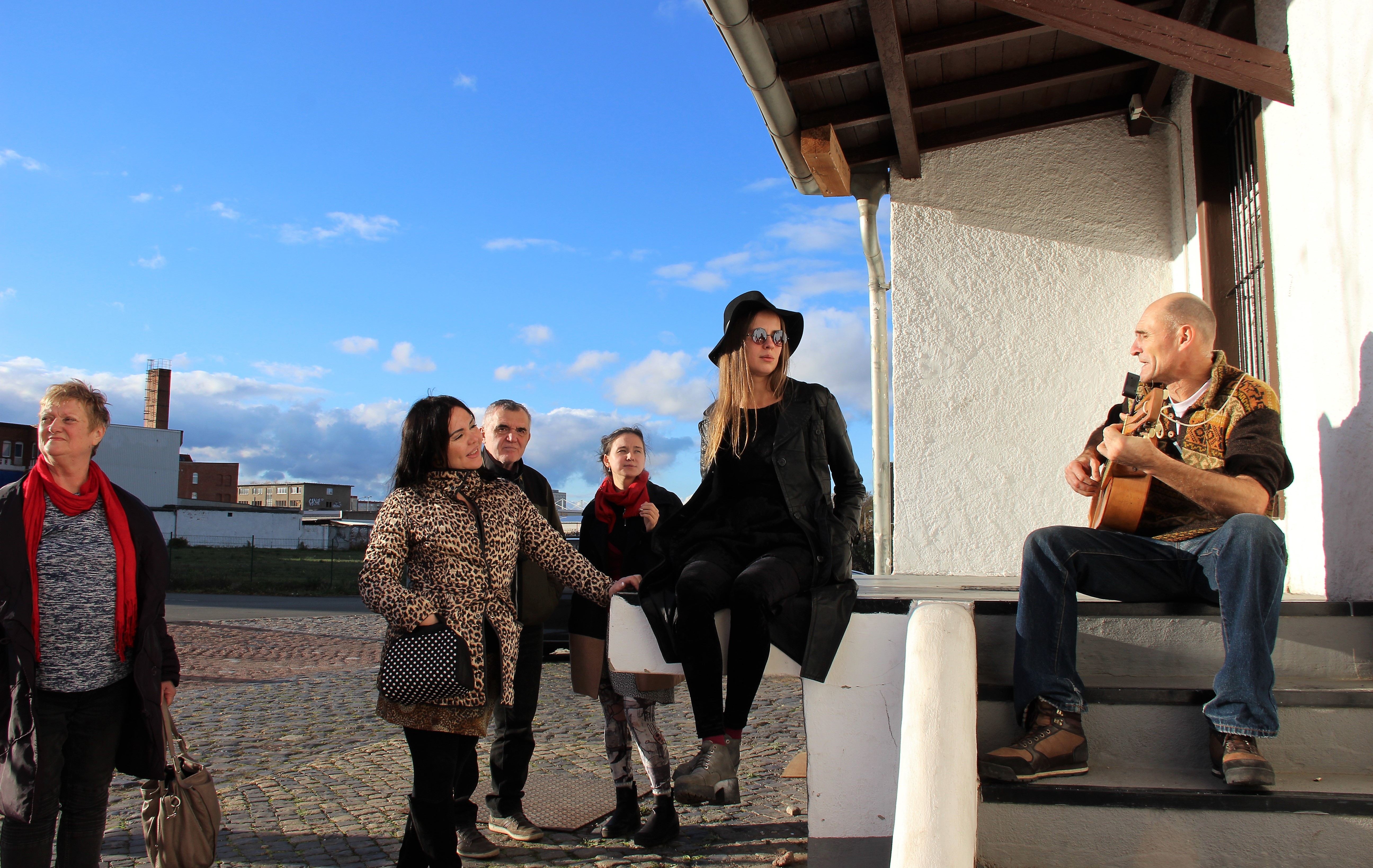 We moved along to Radio LOTTE in the afternoon. Radio LOTTE e.V. is a radio station in Weimar and the surrounding area, made by citizens and for citizens. Since June 2015, Radio LOTTE has been open daily to broadcasting, making their resources available to be used by radio interested citizens, people who would like to offer interesting programmes or interesting ideas, to have a social impact. Moreover, the participants were interviewed by Florence, the program manager from Radio LOTTE, who invited them to share their perspective in cities and local initiatives.

On the final day, we visited Apolda – the Eiermannbau in Apolda has been the role model location of the IBA Thüringen (Internationale Bauausstellung Thüringen GmbH) since 2014. From November 2010 to December 2011, the new owner, the Society for the Development and Rehabilitation of Old Sites GmbH (GESA), renovated the monument in its primary structures in accordance with monument preservation requirements. Despite the many efforts, Eiermannbau is still unused.

In Halle, the group visited Freiraum Galerie, organisation who questions essential topic on what’s our city supposed to look like. To answer questions like these and to have a real impact on people living conditions and their surroundings, Freiraum Gallerie is working together with citizens on concepts of urban development. From planning to realising, their interdisciplinary work with externs and experts ensures profound and sustainable results. The initiative has been focusing on re-framing and redesigning spaces, by which means they also can and want to highlight social imbalances. 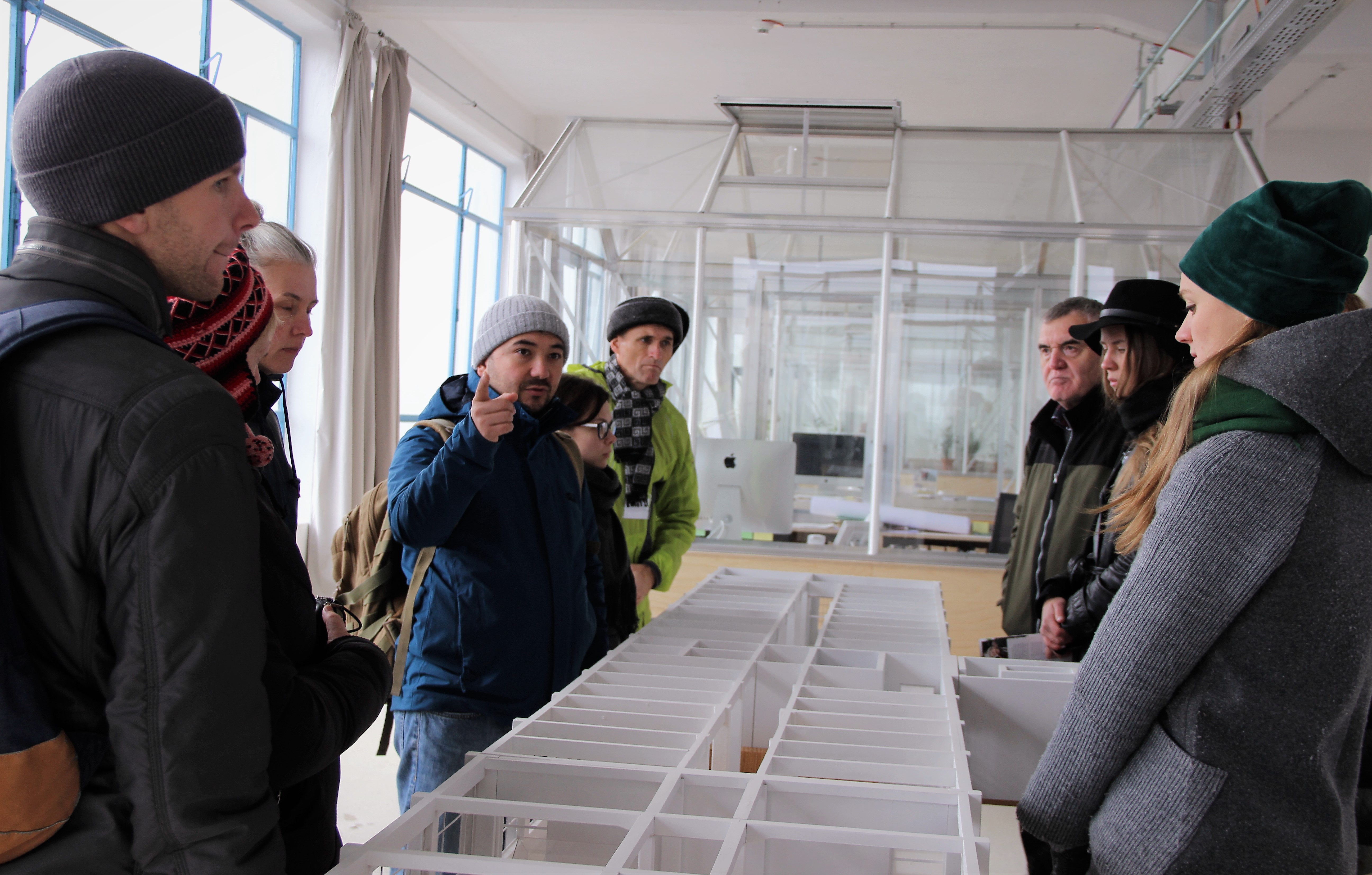