On the 1st June 2018, during the ‘‘Sustainable Month‘‘, CGE Erfurt e.V. was taking part as the organizer and facilitator of a panel discussion consisting of local experts on the topic of sustainable community and grassroots initiative. The panelists talked about their local actions and projects in encouraging and creating urban community in Thuringia.

Our panelists included Sebastian Perdelwitz (Mehrwertstadt Erfurt), who talked about urban development from below, based on the local initiative ‘‘Mehrwertstadt Erfurt‘‘; Gall Podlaszewski (Wendt Architekt und Ingenieur Weimar), who told about current housing projects in Thüringia, and Carlotta Hack (Heinrich Böll Stiftung Thüringen), who presented her project on public participation and local democracy in Saalfeld. 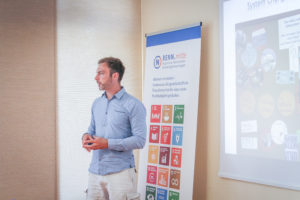 During his talk, Sebastian Perdelwitz stressed out an essential question on how to implement sustainability at the local level. He argued that It is important to pay attention on the system change, where problems and solutions of the city can be realistically addressed and tackled. To do so, he and his team had created system network and started planning for three public campaigns aimed at involving people in the process of electing a city major:

[ap_list list_type=”ap-list1″]
[ap_li]First campaign: critic on municipality and entering the public space by comparing to the other cities with Erfurt. The first campaign lasted for 14 days.[/ap_li]
[ap_li]Second campaign: Wanted! Looking for a major. Open call for the new major who has the similar approach with the topic that they have been fighting for. The campaign was actively disseminated in the social media.[/ap_li]
[ap_li]Third campaign: bringing out topics to the public spaces, such as DIY advertisement boxes at the most important places in the city.[/ap_li][/ap_list]He also shared basic and methods of urban development from below, consisting of strategic planning, story-telling, digital campaigning, art and activism in public space, as well as change management.

Gall Podlaszewski presented his perspective on communal housing in Thüringian, based on various architectural projects in Ardstadt, Mühlhausen, Rudolstadt, Sömmerda and Zeitz led by him and his office. Whereas western Germany has been gaining inhabitants slightly, eastern Germany has been losing people in past years. Especially the smallest communities are aging residents, see little resources but to move to larger places to get essential services and urban infrastructure. Rural areas in Thüringia are facing the threat of depopulation due to the demographical change, and therefore it is important for cities to accommodate the new demand from this population change and stay attractive during this crisis. He pointed out some urban design strategies in renovating old buildings and incorporating it with the new: value upgrading, reduction of unused spaces (instead of total demolition), articulate the new connection with urban fabrics and with the city network, and densification together with introducing new communal places for the community. 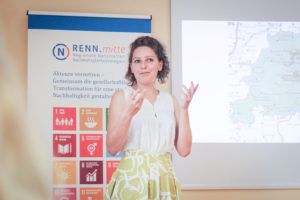 From the case of Probstzella and Saalfeld-Beulwitz,Thüringia, Carlotta Hack offered a local project in which inhabitants were invited to explore their town and create a sense of meaning of their locality through photography workshop called ‘’Local Democracy Do-It Yourself- Show me your region’’. The idea of democracy in this project is introduced in the form of photography that would end up as postcard to reach many people and therefore, connecting local region as well as local networks. This experimental urban intervention is intended not only to broaden the options of local action for inhabitants, but also to creatively engage people from the region and open up new perspective for them. The participants were encouraged to explore their spaces and reclaim the spaces in rural area. This project also aimed at establishing interregional dialog and exchange by working on artistic project with collaborative approach.

Why do cities need sustainable community?

The concept of ‘’sustainable community’’ may be different from city to city on the basis of its individual interests, needs and culture. However, ‘’sustainable community’’ importantly focuses on long-term integrated system approaches by addressing economic, environmental and social issues. As an evolutionary process, sustainability involves an open process in which every member of community is encouraged to participate, including business, individuals, environmental, community groups and government.As we are facing the situation of the global scale, it is shown that population (de) growth, poverty and social segregation, huge mobility and environmental problems are among the urgent challenges posed by world-wide urbanization. According to the UNDP, by 2050 nearly 70 out of 100 people live in cities. Cities have become the world’s major growth engine as huge attractions for talents and investment. On the other hand, according to the Federal Office of Statistics, Germany, it was estimated that 12.5 million of people lived in the former communist east excluding Berlin, which was 2.3 million fewer than when Germany was reunified in 1989-90. Despite of the recent influx of migrants, current demographic trends are unlikely to change anytime soon. Moreover, it is estimated that the number could drop further to only 11 million by 2030. While big cities in Thüringia are slightly growing, number of small towns are shrinking.

In this context, sustainable community means: ‘‘A community that is economically, environmentally, and socially healthy and resilient. It meets challenges through integrated solutions rather than through fragmented approaches that meet one of the goals at the expense of the others”. To ensure sustainable urban development, cities everywhere call for efficient and innovative solution depending on the resilience of its inhabitants and urban governances that are open to participatory planning approach. To find ways to make places work for people, that are inclusive and cohesive and adaptive to change- is a new challenge. 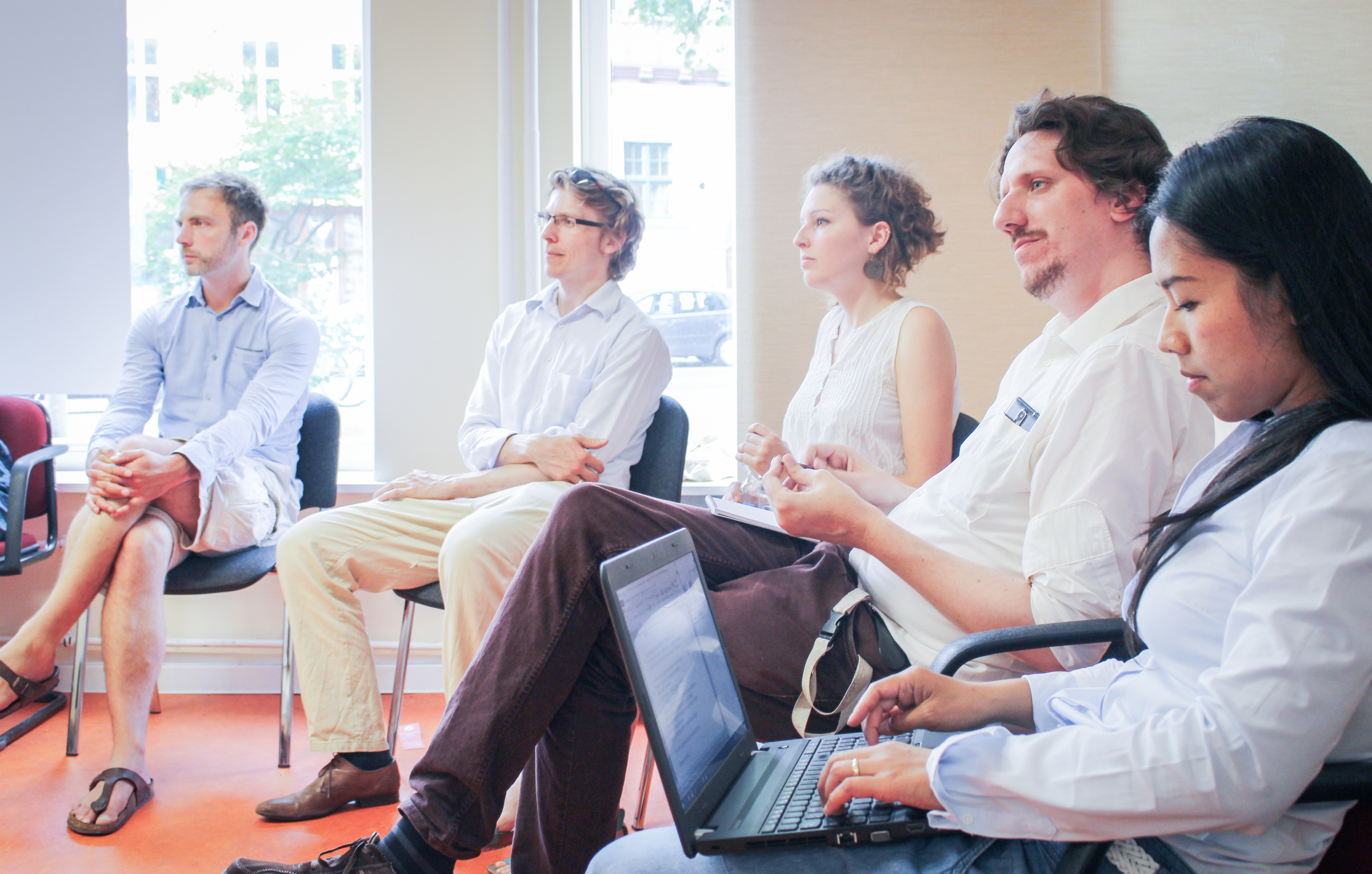 How to make city and community more sustainable?

To conclude, there are several points made during the discussion and Q&A sessions on how to achieve sustainable community in the city:
1. The community spirit and identity was necessary while remains open to diversity to reflect a socially sustainable community, it became clear that the concept and conflict of safety and openness would be essential.
2. Give residents a voice by creating a platform/venues/events for an engaged participatory actions. This could be in the form of working with people who are connected by a desire to contribute to a mission. It is also important to create pedagogical moments of learning and exchange for transfer of knowledge within communities and between communities.
3. Designing housing so that neighbors can interact by reintroducing human scale and into the built environment where the urban physical infrastructure gives priority to the people and public life in leading visionary ideas for cultural change and social participation.
4. Transport infrastructure as a tool for more connected and sustainable communities. A focus on a variety of modes rather a single mode would serve residents better e.g concept of car-sharing. Transport routes and links should do more than connect people to the urban center, but consider the networks that exist within communities. While promoting high density of housing along the transport corridors, should also consider the social elements of mobility which can become embedded within communities.
5. Building a new value system in tackling the negative impacts of societal change. The complex topic of displacement, gentrification and renewal, which often results due to urban development, population change and economic crisis, can be solved by establishing set of values which prioritizes people and their livelihoods over economic gain for public bodies and other institutions. This can be implemented through innovative public-private partnerhsip, innovative financial support schemes and community involvement in place-making.

The event was attended by 25 participants coming from diverse backgrounds, such as students, government bodies, NGOs, community groups and business stakeholders. They took part in the discussion and Q&A session. We would like also to express our gratitute to Mr. Josef Ahlke from Zukunftsfähiges Thüringen e.V. for the support and active involvement during the event.