On September 11th, three CGE members were present in Weimar for the seventh edition of MachBar. This social event, held at the Volkshochschule, featured four institutions who presented themselves and their volunteering opportunities in Thuringia.

If you ever considered the possibility of becoming a volunteer, these questions have probably popped up in your mind:
“But where? What matches me? Who are the people who want my help? What is there to do in practice?”
That’s what most people feel when they are looking for a volunteering commitment and that’s the main reason MachBar exists. This event enables employment agencies and interested volunteers to meet in a relaxed environment. After a non-alcoholic welcome cocktail, 4 institutions presented their volunteer work in 10 minutes each. During the subsequent couscous meal, questions could be asked and personal contacts made.

The first presenter was Arlett Symanowski, from the European Youth Education and Meeting Centre Weimar, the Thuringian coordinating body of “School without Racism – School with Courage”, which is the largest school network in Germany. This institution helps to organize and carry out Courage actions on the ground, which were presented at MachBar. Trainees who would like to work on events and their organization two days a week are urgently needed. Likewise, helpers are sought for admission, service or the preparation and follow-up of Courage events.
Contact: Arlett Symanowski, Tel. 03643 / 827-144, Mail: symanowski@ejbweimar.de

Next was Katrin Katzung from the board of the Bürgerstiftung Weimar, who campaigned for the support of various community focused projects. This foundation is always looking for more and new donors wishing to help ideas like the “Child and Youth Fund”, the “Emergency Aid” or the “Weimar Holiday Pass Co-financed”, as well as the senior companion “Weimars Gute Nachbar”. The Bürgerstiftung celebrates its 15th anniversary in 2019. On the occasion of the jubilee year, help in the areas of ​​public relations, press and homepage care is highly needed, as well as organizing of events.
Contact: Katrin Katzung, www.buergerstiftung-weimar.de

At the end, Stefanie Lachmann from the Volunteering Agency presented the hands-on projects of the Weimar Volunteer Day, which took place on the 22nd of September. Special need for volunteers still exists for an activity aimed at gardening the Weimar-Schöndorf primary school’s garden. There are also places available for the “Herbstputz bei Johannes” project, whose target is a thorough cleaning of Johanneskirche in Oberweimar. For the project “Weimar-West is dressing up!”, local residents are called upon to work together to ensure order in the central district park or to carry out minor repairs around the Paul-Schneider community centre. These and other hands-on projects, including placing details and registration options can be found at www.ehrenamt.buergerstiftung-weimar.de/freiwilligentag 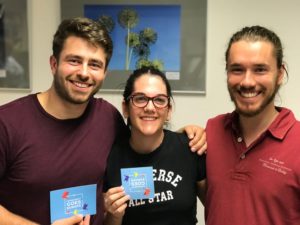 From CGE’s side, there were three members present in the event: Dennis, Ana and Duarte. Dennis was responsible for our presentation. Here is a small review from Ana:
[ap_testimonial image=”https://www.cge-erfurt.org/wp-content/uploads/2018/09/MachBar_CGE_Participated_In_The_7th_Edition_Of_The_Event_Comment_Ana.jpg” image_shape=”undefined” client=”Ana Lancha” designation=”CGE Volunteer”]
We were very happy to be able to go to MachBar with Dennis. Since we had only been in Germany for one week, it was our first time in Weimar and, even though we didn’t have much time, we really enjoyed it. Hearing about other organizations in Thuringia and what they do was very interesting, and we got the chance to present ourselves and talk about our ambitions and goals during for the next year with CGE. I really hope that it gets people more interested in volunteering, either locally or with the European Solidarity Corps.
[/ap_testimonial]

Not only this event was a success in terms of networking and expanding CGE’s name and influence, it was also featured on a local newspaper! Here you can read the Thüringer Allgemeine’s report on the activity. If you are interested in the event and would like to attend it, the next MachBar will take place on the 13th of November. Follow the Bürgerstiftung Weimar’s Facebook page to stay informed.