In Russia, the relationship between small towns and capital cities is affected by economic turbulence and labour market movement, which creates barriers to the migration of the labour force into big cities, hence the relevance of this topic. This rationalization of regional economic development could lead to the degradation of small cities. Russian local grassroots projects and the academic community have been working out strategies for establishing networks of local initiatives for the population of small towns. Essentially, such network would provide for the institution of the social, economic and cultural conditions usually found in big cities to co-exist with the typology and geographic of small provincial towns.

Meanwhile, “Stadt im Dialog” 2016/2017 has provided an impressive growth and quality in creating a platform for dialog with authorities and various stakeholders in Russian cities. There are more and more active citizens who can and want to practice their right to the city and contribute to the enhancement of their living environment. Most of the activities of “Stadt im Dialog” 2016/2017 have been participated and co-produced together with city authorities and other stakeholders in collaborative programs, aimed at urban development and civic participation. 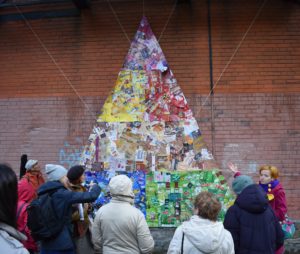 To continue working on common points of reference, we would like to address the issue of underestimation of the problems and challenges in the small provincial towns in comparison to the situation in bigger cities, within the new project. Therefore, the main idea of the project “Stadt im Dialog 3: Growth of urban activism in small Russian cities through P2P learning” is to develop a model of networking and a capacity building infrastructure for urban activists and citizens from small cities in Russian regions. The main aim of the project is to enhance the expertise by developing skills and knowledge, multiplication of experience, networking and participation in the horizontal urban development processes. 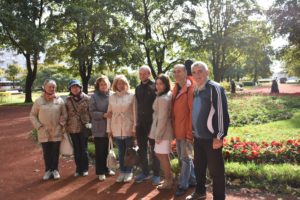 The test-region for this project is Leningradskaya oblast – this is a very typical region, representative of entire Russia. It is 500 km long and 320 km wide, with a population of 1,8 million people. The region is surrounding St. Petersburg, as the second biggest city in Russia with its 5,5 million population. It occupies the 39th place among Russian regions in terms of size, 27th place in terms of population and 19th place in terms of regional domestic product. The region includes 17 districts, consisting of 64 towns and 135 villages.

Within this past weekend, coordination team from CISR has organized a workshop weekend (September 22nd/23rd). In two days, the 17 participants from the Leningrad region had the opportunity to come to St. Petersburg to learn, share and brainstorm various urban activity projects in which they have been involved in and/or would love to see happen locally, in the upcoming months or years. The previous participants of “Stadt im Dialog” 2016/2017 were able to share their achievements and the new group quickly began to formulate their own desires. August and September have been full of various activities and will be complemented by the already planned October exchange travel, which is promising to be much more concrete and hands on. 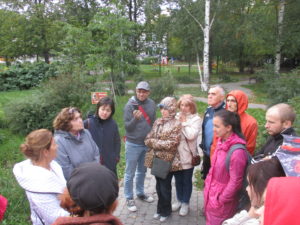 Stay tuned for more upcoming posts and events on October and November!